Consult with a Specialist 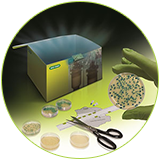 See Out of the Blue CRISPR Kit and Genotyping Extension.

The advent of CRISPR as a gene editing tool has revolutionized drug discovery and development in a very short time. The CRISPR-Cas9 system uses short RNAs to direct the Cas9 nuclease to target specific DNA sequences for editing. Because CRISPR uses RNA rather than a protein to target nuclease activity, CRISPR-Cas9 activity can be easily and accurately retargeted by synthesizing a new guide RNA (gRNA). The gRNA effector also makes this technique amenable to high-order multiplexing, for example, large-scale screening using hundreds or thousands of gRNAs in a single experiment. Consequently, complex studies that once took years to develop in animal models can now be completed in just a few months and at a fraction of the cost.

The speed, low cost, and transferability of CRISPR-Cas9 gene editing to almost any species is redefining what is possible in R&D. More and more new applications for CRISPR are published monthly. From creating complex, multi-gene disease models and whole-genome knockout screens in less than two months to creating inducible systems and generating Cas9 variants that act as epigenetic regulators, the development of CRISPR tools has not only accelerated R&D, CRISPR-Cas9 gene editing is emerging as part of the solution for curbing the cost of drug development and reducing late-stage failure rates.