Theory and advice for the best separation.

The term electrophoresis refers to the movement of charged molecules in response to an electric field. Electrophoresis has been developed into a standard molecular biology laboratory technique, where molecules of different sizes and charges are transported through a medium at different rates by an applied electrical field, resulting in their separation.

In an electric field, proteins move toward the electrode of opposite charge. Proteins have a wide range of sizes and shapes and have charges imparted to them by their constituent amino acids. As a result, proteins have characteristic migration rates that can be exploited for separation. The total charge on a protein in an aqueous medium depends on the degree of ionization of its acid and base groups, which can be controlled by buffering. Because the mass of a protein is constant, its charge-to-mass ratio is thereby altered. Protein conformation can also be changed by buffering, detergents, and oxidation/reduction. These factors allow for differences in protein migration rates to be tuned to a degree, thus enhancing separation. In protein electrophoresis, the proteins move through and aqueous polymer gel, which retards migration and retains them for imaging and analysis. The rate proteins move in gel electrophoresis is governed by relationships among the characteristics of the electrophoresis system and the proteins.

In most PAGE applications, the gel is mounted between two buffer chambers, and the only electrical path between the two buffers is through the gel. Usually, the gel has a vertical orientation, and the gel is cast with a comb that creates wells in which the samples are deposited. Applying an electrical field across the buffer chambers forces the migration of proteins into and through the gel. The movement of the proteins through the gel is normally tracked visually by the addition of a dye to the sample, which can be seen moving further down the gel over time. If the gel is run for too long, the proteins can run off the gel. 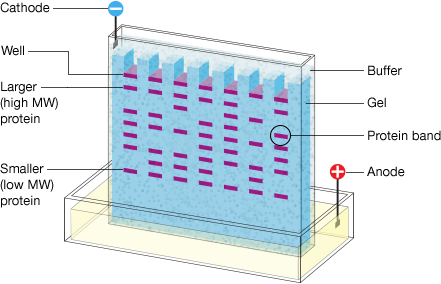 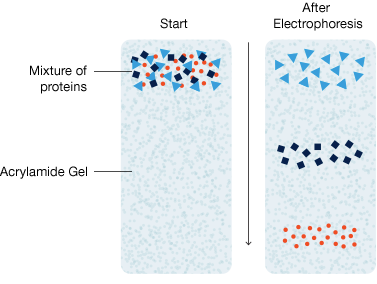 Native PAGE is a method in which proteins are prepared in nonreducing, nondenaturing sample buffer, and electrophoresis is also performed in the absence of denaturing and reducing agents. Since the native charge-to-mass ratio is preserved, protein mobility is determined by a complex combination of factors. Additionally, since protein-protein interactions are retained during separation, some proteins may also migrate together as multisubunit complexes and move in unpredictable ways. Moreover, because the native charge is preserved, proteins can migrate towards either electrode depending on their charge.

Effect of SDS on proteins in aqueous buffer. SDS helps denature proteins so they adopt a rod-like conformation. SDS also adds an overall negative charge to the protein.

Migration of Proteins and Ions

This method incorporates the detergent sodium dodecyl sulfate (SDS) into the buffer system and has become the most popular form of protein electrophoresis. When proteins are separated in the presence of SDS and denaturing agents, for example, reducing agents to dissociate intra-protein disulfide bonds, they become fully denatured and dissociate from each other. In addition, SDS binds noncovalently to proteins and imparts several characteristics that can be exploited for protein separation:

As a result, the rate at which SDS-bound protein migrates in a gel depends primarily on its size, enabling molecular weight estimation of the individual proteins as they are resolved into separate bands on the gel. 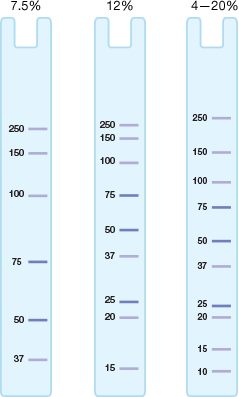 Polyacrylamide gels are prepared in the laboratory from a solution of acrylamide monomer, which can polymerize into long chains, and bis-acrylamide, which can form cross-links between chains. Polymerization occurs with the addition of an activator, usually the oxidizing agent ammonium persulfate (APS), which provides a source of free radicals to initiate polymerization, typically along with a catalyst to promote radical formation, commonly tetramethylethylenediamine (TEMED).

Gel percentage is the main determinant of protein migration rates in PAGE. Polyacrylamide gels are characterized by two parameters: total monomer concentration (%T, in g/100 ml) and weight percentage of cross-Iinker (%C). By varying these two parameters, the pore size of the gel can be optimized to yield the best separation and resolution for the proteins of interest. %T indicates the relative pore size of the resulting polyacrylamide gel; a higher %T refers to a larger polymer-to-water ratio and smaller average pore sizes.

The practical ranges for monomer concentration are stock solutions of 30–40%, with different ratios of acrylamide monomer to cross-linker. The designations 19:1, 29:1, or 37.5:1 on acrylamide/bis solutions represent cross-Iinker ratios of 5%, 3.3%, and 2.7%, respectively, with 37.5:1 being the most commonly used ratio for protein separations.

To see how protein bands of various sizes resolve on gels with different gel percentages and buffer chemistry:

Gels can be made with a single, continuous percentage throughout the gel (single-percentage gels), or they can be cast with a gradient of total monomer concentration, %T, through the gel (gradient gels). Gel percentages for single-percentage gels are usually between 7.5% and 20%, and for typical gradient gels are 4–15% and 10–20%. Use protein migration charts and tables to select the gel type that offers optimum resolution of your sample.

To select the best gel percentages and buffer chemistry for your samples:

Handcast gels must be prepared from acrylamide and bis-acrylamide monomer solutions; the component solutions are prepared, mixed together, and then poured between two glass plates to polymerize. Because acrylamide and bis-acrylamide are neurotoxins, care must be taken to avoid direct contact with the solutions and to clean up any spills, and the acrylamide powders present an inhalation hazard. In addition, the solutions must be completely degassed to avoid the formation of bubbles in the gel. Overall, the hand-casting process is labor intensive, is not as controlled as it is by gel manufacturers and contributes to more irregularities and less reproducibility than precast gels.

This is a new category of polyacrylamide gel which behaves like a single percentage or gradient gel but contains a unique trihalo compound. This compound reacts with the tryptophan residues in a UV-induced reaction to produce fluorescence, which can be easily detected by a compatible imager either within gels or on a membrane. Activation of the trihalo compounds in the gel adds 58 Da moieties to available tryptophan residues and is required for protein visualization. Because the compound becomes covalently bound to the protein molecules, they can be imaged repeatedly on the gel or on a membrane after transfer, without additional staining and destaining steps. The sensitivity of the system is comparable to staining with Coomassie (Brilliant) Blue for proteins with a tryptophan content >1.5%; sensitivity superior to Coomassie staining is possible for proteins with a tryptophan content >3%.

Stain-Free gel technology allow users to instantaneously visualize protein after electrophoresis, verify that all proteins have been transferred out of the gel, and validate that all of the proteins are on the membrane without the need for additional staining/destaining steps. This potentially saves time wasted on western blots with problems that would not otherwise have been detected until the later stages of blot processing and development.

The pH and ionic composition of the buffer system determine the power requirements and heavily influence the separation characteristics of a polyacrylamide gel. Buffer systems include the buffers used to:

Most common PAGE applications utilize discontinuous buffer systems, where two ions differing in electrophoretic mobility form a moving boundary when a voltage is applied. Proteins have an intermediate mobility making them stack, or concentrate, into a narrow zone at the beginning of electrophoresis. As that zone moves through the gel, the sieving effect of the gel matrix causes proteins of different molecular weights to move at different rates. Varying the types of ions used in the buffers changes the separation characteristics and stability of the gel.

Gel and Buffer Chemistries for PAGE 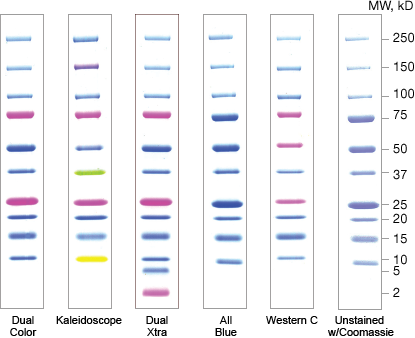 Protein standards are mixtures of well-characterized or recombinant proteins that are loaded alongside protein samples in a gel. They are used to monitor separation as well as estimate the size and concentration of the proteins separated in a gel.

Recombinant standards are engineered to display specific attributes such as evenly spaced molecular weights or affinity tags for easy detection. These standards often offer absolute molecular weight accuracy confirmed by mass spectrometry. Because they contain a known amount of protein in each band, they also allow approximation of protein concentration. 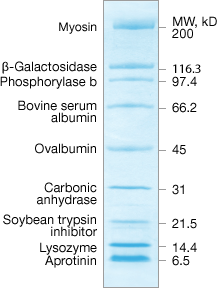 Natural standards are blended from naturally occurring proteins. Although prestained natural standards are effective for monitoring gel separation and efficiency, they covalently bind the dye in different amounts and at different locations. This may produce broader bands than are seen with recombinant standards, making them less desirable for molecular weight estimations.

Power supplies that are used for electrophoresis hold one parameter constant (either voltage, current, or power). The resistance, however, does not remain constant during a run: resistance changes as discontinuous buffer ion fronts move through the gel. In SDS-PAGE, resistance increases as the run progresses.

Depending on the buffer and which electrical parameter is held constant, heating of the gel may increase or decrease over the period of the run. Use external cooling during long, unsupervised runs. Temperature-controlled runs yield more uniform and reproducible results.

Quick Tips:
How to Minimize Band Distortion During Gel Electrophoresis for Western Blotting

Watch the video below to learn how to eliminate smiling and frowning during electrophoresis to get the best gel resolution for your western blots. 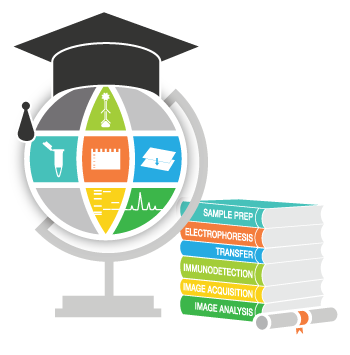 Courses designed to make you a western blotting expert.