What Does Quantitation Mean?

Quantitating a western blot refers to the measurement of the signal emitted by your protein band(s) of interest. The signal intensity of the band is directly proportional to the concentration of your target protein. By analyzing the intensity of the signal, you may determine whether the expression of the target protein in one sample has increased or decreased relative to another sample or control. Note: western blots are semi-quantitative so they are ideal for showing relative protein expression rather than an absolute quantity.

A protein band is a feature that appears in a western blot image. A western blot image is made up of pixels, which contain information about how much signal was collected at each location in the image. A digital image of a blot can be thought of as data in three dimensions. Each pixel in a blot image has an x and y coordinate, in addition to an intensity value, which occupies the third dimension. Therefore, band quantity can be thought of as a volume, which is the total amount of signal for all the pixels within that band.

No western blot is perfect, and all blot images show some level of background. This background can come from non-specific binding during antibody incubation, membrane background in the case of fluorescent images, or background arising from the instrumentation itself.

Background on the blot or image can interfere with accurate quantitation of band signal and may prevent you from measuring the relative expression of your target protein. Image analysis software typically contain tools to help you reduce the impact of background on a band’s quantity and allow you to better quantify the target protein’s true signal. Note: If you have not selected your preferred background subtraction settings, then your software will automatically use default settings, which may or may not be optimal for your analysis.

One of the most intuitive ways to quantify a band is to simply draw a box around it and quantify the signal within the box. Volume boxes should be drawn around the bands of interest in such a way that they include all of the intensity of the band with a minimal amount of surrounding background.

When using volume box tools, make sure to capture all of the band of interest without excessive background areas and without including adjacent bands.​

This method allows more customizable background subtraction, but it assumes that the background signal on the blot is additive with the signal from the band of interest. When comparing multiple bands that represent the same amount of protein, if one of the bands lies directly over a region with high background, then that specific band will result in a higher signal.

Another common method to subtract background is termed global background subtraction. In this method, you draw an additional region of interest and designate it as a background region that applies to the entire image. The mean value in this background volume box is then subtracted from all of the volume boxes, even if the background levels immediately surrounding the volume boxes vary.

The other common approach for quantitating western blots is commonly referred to as using lane and band tools. This approach utilizes a two-step procedure where each lane of a blot is identified in the image, and then individual bands are identified inside each lane.

The lane and band tools are particularly useful when you want to quantitate either the total protein signal in each lane or multiple bands in each lane. Lanes should be drawn around the entire region where bands are present and extend slightly outside the boundary to ensure that all protein signal in the lane is included. Once the lane frame is drawn, the lane profile can also be visualized. Additionally, lane and band tools use a different approach of background subtraction, one that makes it easy to apply a localized background subtraction to each band in a lane.

Overview of Lane and Band Workflow​​

The final step in lane and band analysis is establishing the background to be subtracted. This is most easily visualized using the Lane Profile tool. In the Lane tool, background is typically determined using some variation of the rolling disc method.

In this method, it is helpful to imagine a disc of variable diameter (but always smaller than the largest blot feature) being “rolled” across the lane profile plot. The rolling disc will “fall up” the band peaks if the band peaks are wide enough and determine the background level. The disc size is adjustable, allowing more or less background to be removed. A small disc size fits further into band peaks and allows greater background subtraction. Conversely, large disc sizes will not fit very far into a band peak, reducing the amount of background subtracted.

The area in green shows the signal left after background subtraction. Left: A large rolling disc leaves most of the area in the bands untouched as it cannot “fall up” into each peak. Right: A small rolling disc travels up into the peaks and subtracts more signal. To determine if the subtracted background signal is sufficient or too much, an sideways image of a lane is positioned adjacent to the chromatogram.​

Using a large rolling ball (center) leaves a lot of the background in the band volume (green area). A small rolling ball (right) does a good job of removing membrane background and leaving just the true signal from the bands.

In western blotting, normalization refers to correcting data to reduce the effects of experimental error arising from variations in pipetting, sample concentration, or uniformity of protein transfer between gel and membrane. Normalization allows your western blot to be more quantitative and gives you confidence that differences in signal on a western blot reflect differences in protein expression between samples on the blot.

Normalizing western blot data relies on an internal loading control or normalization reference that is used to correct for these sources of experimental error.

There are two types of commonly used loading controls. The first control method is to use a protein that is present in all samples and its expression is not expected to be altered by the experimental treatment used in your experiment, often called a housekeeping protein. The second control method is to detect all proteins on the blot with a nonspecific agent to give the total protein signal.

In either case, any variation in the signal of the reference loading control indicates experimental variation rather than a difference in expression of the target protein. Regardless of which loading control is used, an effective normalization strategy requires two prerequisites to be met.

The correction underlying normalization is straightforward and some western blotting imaging software include tools to simplify the process. Whether you perform the process yourself, or rely on the software tools, the overall process is similar. A mathematical correction is used to compensate for sample-sample variability.

Accurate normalization using housekeeping proteins requires both of the following:

Use of housekeeping proteins are vulnerable to both of these limitations, and care must be taken to ensure accurate results.

The expression level of housekeeping proteins may change due to:​

Using a housekeeping protein as a loading control requires that its expression remain constant across all samples of the experiment, and no change due to the experimental treatment. Published evidence shows several examples of differential expression of commonly used reference proteins (Ghosh R et al. 2014 and Eaton SL et al. 2013).

Therefore, before relying on a housekeeping protein as a loading control, validate that its expression is stable through the experiment and that it faithfully reflects the sample load.​

Total Protein as a Control

Because total protein stains are less sensitive than antibody-based immunodetection, they are far less likely to result in an oversaturated signal. As a result, they exhibit good linearity in the common loading range of 10–50 μg of cell lysate. Therefore, total protein normalization can be used successfully with most target proteins including those with low expression levels as both the target protein and the total protein signals will be within their respective linear ranges.

Since total protein normalization utilizes the entire protein load as the loading control signal, it is inherently less susceptible to expression variations of any one protein due to experimental conditions. 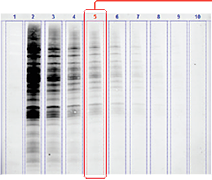 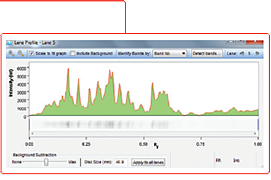 Molecular weight determination using SDS-PAGE gels takes advantage of the linear relationship between the logarithm of the molecular weight of a protein and relative front, Rf. 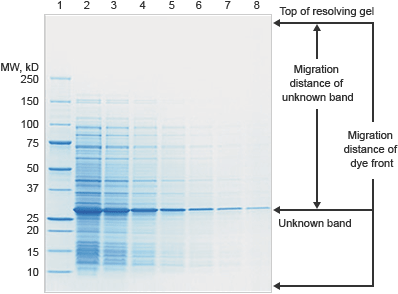 Measure the distance from the top of the resolving gel to each band of the standard and to the dye front.

Calculate the Rf (relative front) for each band in the standard:

The resulting plot should give a line.

Calculate the Rf for the unknown band using the same formula

Plot the log (MW) as a function of Rf for the standards bands.

Generate the equation y = mx + b, and solve for y to determine the MW of the unknown protein.

Image analysis software typically contain tools that simplify the molecular weight calculations and only require you to identify what standard was loaded on the gel. You only then need to identify your bands of interest and set the location of the starting wells on the gel and location of the dye front.