What is Real-Time PCR (qPCR)?

Nucleic acid amplification and detection techniques are among the most valuable tools in biological research today. Scientists in all areas of life science — basic research, biotechnology, medicine, forensics, diagnostics, and more — utilize these methods in a wide range of applications. For some applications, qualitative nucleic acid detection is sufficient. Other applications, however, demand a quantitative analysis. Real-time PCR can be used for both qualitative and quantitative analysis; choosing the best method for your application requires a broad knowledge of this technology. This section provides an overview of real-time PCR, reverse-transcription quantitative PCR techniques, and the choice of instruments that Bio-Rad offers for these techniques. It also provides tips for steps in RNA isolation such as sample collection, RNA extraction, and analyzing the quality and quantity of RNA.


What Is Real-Time PCR?

In conventional PCR, the amplified DNA product, or amplicon, is detected in an end-point analysis. In real-time PCR, the accumulation of amplification product is measured as the reaction progresses, in real time, with product quantification after each cycle. 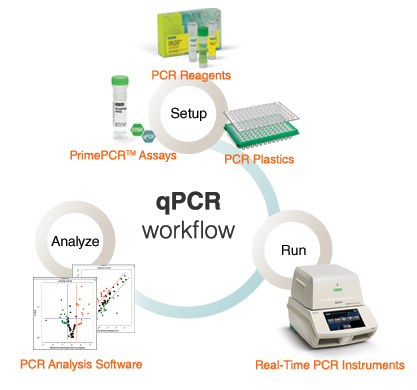 The main advantage of real-time PCR over PCR is that real-time PCR allows you to determine the initial number of copies of template DNA (the amplification target sequence) with accuracy and high sensitivity over a wide dynamic range. Real-time PCR results can either be qualitative (the presence or absence of a sequence) or quantitative (copy number). Quantitative real-time PCR is thus also known as qPCR analysis. In contrast, PCR is at best semiquantitative. Additionally, real-time qPCR data can be evaluated without gel electrophoresis, resulting in reduced bench time and increased throughput. Finally, because real-time qPCR reactions are run and data are evaluated in a unified, closed-tube qPCR system, opportunities for contamination are reduced and the need for postamplification manipulation is eliminated in qPCR analysis.

Real-time PCR/qPCR assays have become the tool of choice for the rapid and sensitive determination and quantitation of nucleic acid in various biological samples, with diverse applications such as gene expression analysis, the detection of genetically modified organisms in food, and cancer phenotyping.

In research laboratories, qPCR assays are widely used for the quantitative measurement of gene copy number (gene dosage) in transformed cell lines or the presence of mutant genes. In combination with reverse-transcription PCR (RT-PCR), qPCR assays can be used to precisely quantitate changes in gene expression, for example, an increase or decrease in expression in response to different environmental conditions or drug treatment, by measuring changes in cellular mRNA levels.


How Does Real-Time PCR Work?

To understand how real-time PCR works, we illustrate a qPCR analysis using a typical amplification plot (Figure 1). In this plot, the number of PCR cycles is shown on the x-axis, and the fluorescence from the amplification reaction, which is proportional to the amount of amplified product in the tube, is shown on the y-axis. 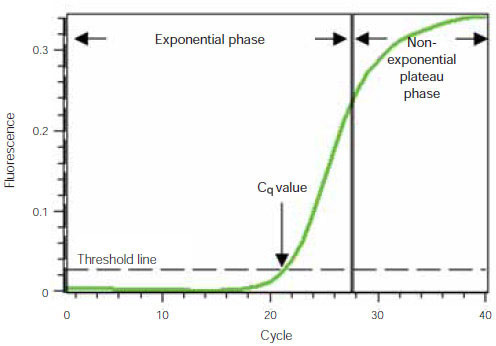 Initially, fluorescence remains at background levels, and increases in fluorescence are not detectable (cycles 1–18, Figure 1) even though product accumulates exponentially. Eventually, enough amplified product accumulates to yield a detectable fluorescence signal. The cycle number at which this occurs is called the quantification cycle, or Cq. Because the Cq value is measured in the exponential phase when reagents are not limited, real-time qPCR can be used to reliably and accurately calculate the initial amount of template present in the reaction based on the known exponential function describing the reaction progress.

Sample Collection
For RNA isolation and the quantification of gene expression, sample material should be as homogeneous as possible. If your tissue sample consists of many different cell types, pinpointing the expression pattern of your target gene may be difficult. If you have a heterogeneous sample, use one of the many methods that are available for separating and isolating specific cell types, for example, tissue dissection, needle biopsies, and laser capture microdissection. The collected cells can then be used to obtain the RNA samples.

RNA Extraction
Either total or poly(A+) RNA can be used for most real-time RT-qPCR applications. One critical consideration in working with RNA is to eliminate RNases in your solutions, consumables, and labware. Ready-to-use RNase-free solutions can be purchased, or your solutions can be treated with diethyl pyrocarbonate (DEPC) and then autoclaved. RNases on labware can also be inactivated by DEPC treatment or by baking at 250°C for 3 hr.

Prepared RNA samples may need DNase treatment to prevent potential amplification of any contaminating genomic DNA, which could lead to overestimation of the copy number of an mRNA. When starting material is limited, however, DNase treatment may be inadvisable, because the additional manipulation could result in loss of RNA. The amplification of potentially contaminating genomic DNA can be precluded by designing transcript-specific primers, for example, primers that span or amplify across splice junctions.

Two methods are available for quantification of gene expression by RT-qPCR: two-step RT-qPCR and one-step RT-qPCR. In both cases, RNA is reverse transcribed into cDNA, and the cDNA is then used as the template for qPCR amplification. One-step and two-step refer to whether the RT and real-time PCR amplification are performed in the same or separate tubes. In the two-step method, RNA is first transcribed into cDNA in a reaction using reverse transcriptase. An aliquot of the resulting cDNA is then used as a template for multiple qPCR reactions. In the one-step method, RT and qPCR are performed in the same tube.

Quantitative PCR (qPCR): Hallmarks of an Optimized SYBR® Green I Assay
Green I quantitative PCR (qPCR) assay. qPCR assays must be optimized to ensure results that are biologically and statistically significant. Topics include a brief review of qPCR chemistry, with an emphasis on SYBR® Green I reactions, and definitions of the four main characteristics, or hallmarks, of an optimized qPCR assay.