A successful qPCR assay requires efficient and specific amplification of the product. Both the primers and the target sequence can affect amplification efficiency and specificity and thus the accuracy of qPCR assays. Therefore, care must be taken when choosing a target sequence and designing primers. The use of PCR primers specifically designed and validated for qPCR assays with your target of interest is highly recommended. This section provides information and tips on designing qPCR assay primers and probes, choosing a target sequence, multiplexing, selecting reporters and quenchers, and validating and optimizing qPCR assays.

A number of free online resources are available to help you with primer design (see the Websites tab below). Commercially available programs such as Beacon Designer software can perform both primer design and target sequence selection.

Choosing a Target Sequence for a qPCR Assay

When choosing a region of the target to amplify, follow these guidelines:

Designing Primers for a qPCR Assay

Designing Probes for a qPCR Assay

Primers can be combined with DNA-binding dyes in amplification reactions to monitor the appearance of double-stranded DNA (dsDNA). However, fluorescently labeled probes can be used for greater specificity in a qPCR assay. The most common are hydrolysis probes (see Real-Time PCR Primer and Probe Chemistries for more details).

The Tm of a hydrolysis probe should be 5–10°C higher than that of the primers. In most cases, the probe should be <30 nucleotides nucleotides long. It must not have a G at its 5' end because this could quench the fluorescence signal even after hydrolysis. Choose a sequence within the target that has a GC content of 30–80%, and design the probe to anneal to the strand that has more Gs than Cs (so the probe contains more Cs than Gs).

Currently, it is possible to amplify and quantify as many as five targets in a single qPCR assay, depending on the features of your real-time PCR instrument. Multiplexing confers the following advantages over singleplex reactions:

Selection of Reporters and Quenchers for Probes
Multiplex qPCR assays require multiple reporters — one to follow each amplification reaction. To distinguish each reaction, choose reporter fluorophores with minimally overlapping emission spectra. The selected fluorophores must also be compatible with the excitation and emission filters of your real-time PCR detection system.

To achieve accurate template quantification in a qPCR assay, each reaction must efficiently amplify a single product, and amplification efficiency must be independent of template concentration and the amplification of other templates. Therefore, you should validate your qPCR assay to verify that these conditions hold.

Determining Reaction Efficiency: Using a Standard Curve
A common method for validating qPCR assays involves the construction of a standard curve, enabling the determination of the efficiency, linear dynamic range, and reproducibility of a qPCR assay. The efficiency of the assay should be 90–105%, the R2 of the standard curve should be >0.980 (or r > –10.990), and the quantification cycle (Cq) values of the replicates should all be similar.

If you are performing a multiplex qPCR assay, you should validate and optimize the individual assays before combining them in the multiplex assay. Note that the range of template concentrations used for the standard curve must encompass the entire range of template concentrations of the test samples to demonstrate that results from the test samples are within the dynamic range of the qPCR assay.

qPCR Assay Specificity Verification: Melt Curve and Gel Analysis
Melt curve analysis can be used to identify different PCR products, including nonspecific products and primer-dimers when the fluorescence of the reporter chemistry depends on the presence of dsDNA, as with SYBR® Green dye. This property is valuable because the presence of secondary nonspecific products and primer-dimers can severely reduce the amplification efficiency and, ultimately, the accuracy of the qPCR assay. Primer-dimers can also limit the dynamic range of the desired standard curve due to competition for reaction components during amplification. After completion of the amplification reaction, a melt curve is generated by increasing the temperature in small increments and monitoring the fluorescence signal at each step. As the dsDNA in the reaction is denatured, the fluorescence decreases rapidly and significantly. A plot of the negative first derivative of the fluorescence versus temperature (–d(RFU)/dT vs. T, the rate of change of fluorescence intensity) displays distinct peaks corresponding to the Tm of each product (Figure 1).

Fig. 1. Melt curve analysis of products from a SYBR® Green assay. A, the negative first derivative of the change in fluorescence plotted as a function of temperature. The two peaks indicate the presence of two PCR products; B, gel analysis of the qPCR products. Lane 1, AmpliSize® 50–20,000 bp molecular ruler; lanes 2 and 3, two replicates of qPCR assay products from the reaction shown in A. The two separate bands in the gel confirm the presence of two PCR products. 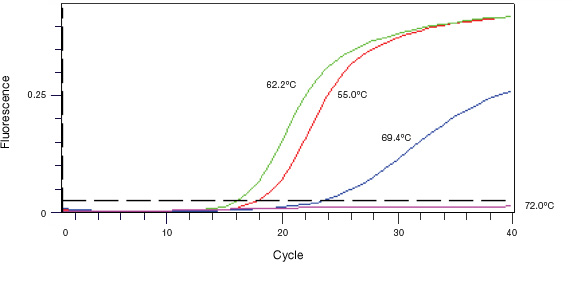 Because SYBR® Green binds to all dsDNA, it is necessary to check the specificity of your qPCR assay by analyzing the reaction product(s). To do this, use the melt curve function on your real-time instrument and also run products on an agarose gel. Figure 3 shows the melt curve and agarose gel analyses from the annealing temperature optimization experiment shown in Figure 2. The reaction with annealing temperature at 62.2°C is shown. An optimized SYBR® Green qPCR assay should have a single peak in the melt curve, corresponding to the single band on the agarose gel, as shown in Figure 3.

Fig. 3. Verification of SYBR® Green reaction specificity. A, melt curve analysis with a plot of the first derivative of the change in fluorescence intensity as a function of temperature. B, agarose gel analysis of the reaction products. Lane 1, molecular weight markers, 100 – 1,000 bp in 100 bp increments, 1,200 bp, and 1,500 bp. Lane 2, single PCR product corresponding to the peak observed in A.

Multiplex qPCR Assay Optimization
If a multiplex reaction is not optimized, the amplification of a more efficient or more abundant target can inhibit that of a less efficient or less abundant target. This occurs because reaction components such as DNA polymerase, dNTPs, and MgCl2 become limiting in later cycles, and the amplification of the less efficient or less abundant target is compromised. Inhibition of a target's amplification will cause its Cq to be delayed in a multiplex qPCR assay relative to that in the singleplex assay. One method for optimizing multiplex reactions involves sequentially increasing the concentrations of DNA polymerase, dNTPs, and MgCl2.

From Singleplex to Multiplex: Making the Most Out of your Real-Time Experiments
Presented in Mandarin