What Are Stem Cells?

Stem cells have two distinguishing characteristics: they have the potential to self-renew, and they can be induced to differentiate into tissue-specific cell types with specialized functions. Stem cells are involved in development, growth, and repair in multicellular organisms.

The term totipotent has been used to describe cells during the first few divisions in the egg after fertilization. This term has generally fallen out of use, partially due to confusion with the term pluripotent.

The number of sources of stem cells found in animals is increasing. It is becoming clear that there are stem cells in most, if not all, adult tissues, and that some tissues have more than one type of stem cell. This brief overview covers only stem cells that are widely studied or currently of potential clinical importance.

ESCs are pluripotent stem cells, having the ability to differentiate into any of the three germ layers: ectoderm, endoderm, or mesoderm. Cells are usually harvested from the inner cell mass of the blastocyst 4 to 5 days after in vitro fertilization of an egg. The cells are cultured and expanded into cell lines. Though the potency of ESCs makes them attractive for use in clinical therapy, there are both ethical and technical problems with their use. The majority of ESCs used in research are murine.

One potential disadvantage of ESCs is that they can form teratomas, tumors containing cell types from all three germ layers. Studies suggest that teratoma formation may be a result of chromosomal changes that occur in some ESC cells during culture. As length of time in culture and the number of passages increase, cells are more likely to display chromosomal instability and mosaicism within the population. ESC cell lines must be carefully monitored for changes in phenotype, gene expression, and karyotype (see Stem Cell Analysis for details).

Generation of ESC lines can be difficult. Frequently, cells removed from the blastocyst do not survive and divide in culture. Culturing and expanding ESCs requires strict culture conditions to both prevent the stem cells differentiating and avoid contamination (see the ESC section of the Stem Cell Isolation and Maintenance page).

The main advantage of ESCs is that they can differentiate into any cell type and present a low risk of graft-versus-host disease (GVHD). Originally, it was thought that there was no risk of GVHD, but some manipulations of ESC to drive them to differentiate into particular cell types can make them immunogenic (Kim et al. 2012). It is postulated that on differentiation, ESCs may start to express latent immunogenic surface proteins that were preprogrammed for expression in normal development.

For many years, the accepted dogma was that most adult tissues and organs contained cells that were differentiated to the point that they could divide only a limited number of times unless they were transformed into cancer cells. Now it is known that somatic stem cells are found throughout the body.

The two types of somatic stem cells that are the best characterized are hematopoietic stem cells (HSCs) and mesenchymal stem cells (MSC – also called marrow stromal cells). Not only are these cells readily available, but they can easily be counted, analyzed by flow cytometry, and separated by cell sorting.

HSCs (hematopoietic stem cells), located primarily in the bone marrow and cord blood, give rise to the cells of the blood. HSCs are a heterogeneous population and can differentiate into both myeloid and lymphoid lineages. Their ability to repopulate bone marrow and blood has been used for many years for bone marrow transplantation.

MSCs (mesenchymal stem cells) are non-hematopoietic stem cells found in most tissues of the body. The largest populations are in bone marrow and cord blood, with Wharton’s jelly, found in the umbilical cord, being a rich source. MSCs are heterogeneous, have multilineage potential, and are capable of differentiating into multiple cell types including adipocytes, chondrocytes, osteoblasts, and cardiomyocytes.

MSCs are the most commonly used cell type in clinical trials for stem cell therapy. Advantages of MSCs include:

Several formulations derived from MSCs are being developed for therapeutics. The immune regulatory properties of MSCs give them potential for use in the treatment of GVHD. MSC-derived treatments are now being used for pediatric GVHD and in trials for adult GVHD. Trials are also under way for the treatment of a number of conditions including Crohn’s disease, multiple sclerosis, and the destruction of pancreatic islet cells in type 1 diabetes.

These stem cells were first identified in bone marrow (Kucia et al. 2005, 2006) and have since been found in many tissues. These somatic stem cells have similar characteristics to ESCs and are able to differentiate into all three germ layers. Because VSELs are pluripotent but do not present any ethical issues, they may provide an effective tool for many regenerative therapies. VSELs can be separated (CD45-/Lin-/Sca-1-) from other bone marrow cells by cell sorting. It is not clear whether teratomas will be a concern for VSELs, as they are for ESCs. Since VSELs can be obtained from a patient for autologous treatments, there are no immunocompatibility concerns.

iPSCs are somatic cells that have been reprogrammed to become ESC-like. Therefore, iPSCs are pluripotent and can give rise to any germ line. To generate iPSCs, cells are forced to express genes for transcription factors that are required for pluripotency and self-renewal.

As with VSELs, the development of iPSCs for therapeutics has the advantage that they can potentially be used for autologous transplantation and so immunocompatibility is not a problem, because the cells to be reprogrammed can be obtained from the patient.

iPSCs were first generated by introducing the transcription factors Oct3/4, Sox2, Klf4, and c-Myc into cells maintained in the same culture conditions used for ESC (Takahashi and Yamanaka, 2006). Most iPSC cell lines have been generated using viral transduction by retroviruses or lentiviruses. (For more information, see the iPSC section in Isolation and Maintenance of Stem Cells).

In some iPSC lines, there is incomplete silencing of integrated viral genes upon differentiation, which increases the risk of tumor development. When iPSCs are injected into immune-deficient mice, they readily form teratomas. It has been suggested that iPSCs are more tumorigenic than ESCs (Gutierrez-Aranda et al. 2010). Additionally, as with ESCs, adaptation to culture and passaging increases the likelihood of development of mosaic populations and chromosomal abnormalities.

Although iPSCs potentially have many advantages for in vivo stem cell treatments, there are still a number of technical hurdles to overcome. For instance, one consideration for iPSCs is epigenetic memory. During development, patterns of methylation of genomic DNA change. There is evidence that reprogramming of somatic cells may not reverse all changes in methylation that occurred during differentiation and maturation. This can mean that some iPSCs are not truly pluripotent, since they retain lineage or tissue specificity. However, this could potentially be exploited in regenerative therapy, by using iPSCs generated from cells in the same lineage as the target cell type.

One area where iPSCs are proving very valuable is for models of development, tissue differentiation, and disease. Most research on diseases relies on animal models, which may, or may not, accurately mimic a disease. The ability to be able to generate cultures of human or animal iPSC cultures provides new ways to follow cell differentiation and the direction of changes in cellular and molecular mechanisms in normal tissues and in disease progression. The availability of populations of cells with defined genotypes and phenotypes offers cheaper, better, and more targeted drug development and preclinical testing (see Stem Cells as Models on the Stem Cells in Therapeutics and Research page). 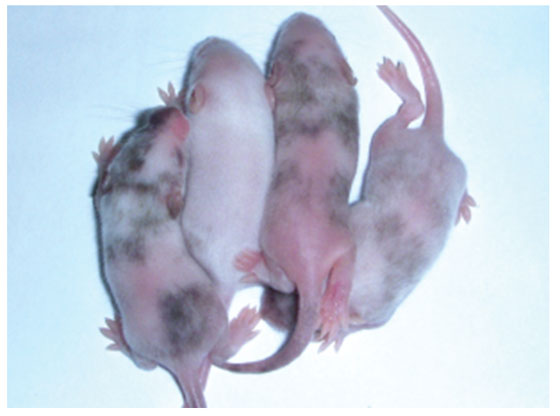 Somatic Cell Nuclear Transfer (SCNT) is the transfer of a somatic nucleus to an enucleated egg (i.e. an isolated nucleus from a differentiated cell inserted into an egg without a nucleus). This technique was used to make Dolly the sheep (Wilmut et al. 1997). The somatic nucleus is reprogrammed by the egg to become pluripotent. These cells are effectively iPSCs and can be used to generate cell lines. Though this technique has been used in animal stem cell research for many years, thought only recently has human SCNT been reported (Tachibana et al. 2013).

Cord blood (and placental blood) has several benefits for clinical therapy. The tissue source is freely and widely available, with no extra risk to the donor and no ethical issues. In contrast, amniotic fluid is captured by amniocentesis, so there is a small chance of harm to the fetus. For these stem cell sources, there is a low risk of GVHD, most likely due the stem cells being immunologically immature.

Banking of cord blood can provide future stem cells for treatment of the donor later in life. These stem cells would have few of the problems of allogeneic stem cells, such as immune incompatibility or the risk of communicable disease transmission. There have been several clinical trials approved for the therapeutic use of cord blood, including the treatment of pediatric stroke and cerebral palsy.

Cord blood contains a large number of stem cells; therefore, substantial numbers of cells can be easily obtained without many passages. This has three advantages: first, the decreased time in culture and number of cell divisions reduces the potential for chromosomal changes; second, cord blood stem cells, although they can give rise to all three germ layers, do not seem to be tumorigenic; third, the ability to rapidly generate large numbers of cells affords the use of high numbers of cells in therapies, which may increase efficacy and reduce the waiting time for treatment.

In 1997, it was hypothesized that any cancer tissue may contain a small fraction of cancer stem cells (Bonnet and Dick 1997). The theory is that there is a population of cancer stems cells that are quiescent, or dividing slowly, until triggered. This theory remains controversial, although it has been gaining acceptance. If proven, this hypothesis may be important in the treatment of cancer because many cancer therapies target rapidly proliferating cells. Stem cells, at G0 phase or slowly dividing may be minimally targeted rather than eradicated, potentially forming a reservoir for future tumor development.

Plants, like animals, need a renewable source of cells for the growth and repair of the different tissue types. During their lives, plants can undergo substantial damage and regenerate, for example, regrowth after being partially eaten, pruned, or burned.

A plant callus is a mass of undifferentiated cells, derived from previously differentiated plant cells, that have the characteristics of stem cells and are thus able to give rise to all plant tissue types. Calli occur naturally on plant wound sites, and callus formation can be induced in vitro from certain somatic plant tissues by plating on tissue culture media with supplements such as nutrients and plant growth regulators. However, a callus contains a heterogeneous population of cells, and pluripotency can be hard to maintain for extended periods.

The discovery of stem cells and the subsequent finding that there are stem cells in most, if not all, tissues has increased our understanding of the biology of tissues and organisms. Study of stem cells in situ and in culture is providing new insights into development, cell biology, and molecular processes. In addition, stem cells have a huge potential for the treatment of many diseases as well as use in regenerative medicine.