Isolation and Maintenance of Stem Cells

The isolation, generation, and maintenance of stem cells pose several challenges due to the propensity of stem cells to differentiate and for variations such as chromosomal and epigenetic changes to occur in these cells during culture. Protocols are continuously evolving and vary for different types of stem cells.

This section provides a brief overview of methods for isolation and maintenance of the primary types of stem cells.

The majority of ESC lines are mouse, not human. The basic protocol for generation of ESCs is similar for all species.

ESCs are pluripotent stem cells generated from early-stage embryos. A fertilized embryo is required for the generation of ESCs. Typically, cells are harvested from the blastocyst 4–5 days post-fertilization. The outer cell layer of the blastocyst, called the trophoblast, contains a fluid-filled cavity, the blastocoele, and an inner cell mass of 10–20 cells. The inner cell mass, which is also called the embryoblast, is removed for culture. Occasionally, cells may be obtained from the stage before the formation of the blastocyst, the morula.

The cells from the inner mass are placed in culture, and those that are viable are expanded. Generation of ESCs is inefficient; many cells do not adapt to cell culture and do not survive.

Human, mouse, rat, and other ESC lines are available through commercial vendors. 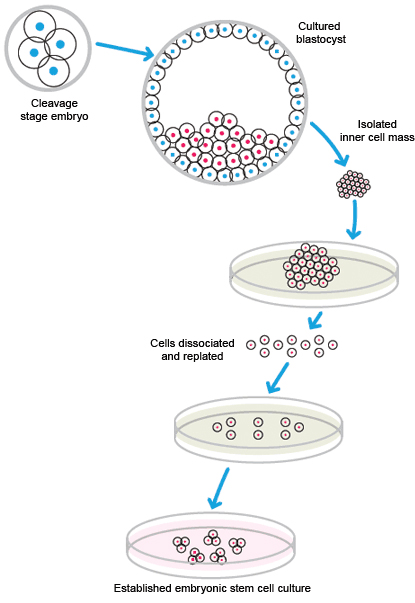 Somatic (adult) stem cells are found in most major organs and tissues, and are currently being isolated from many tissues in the body. The methods of isolation and culture are dependent on the source and lineage. Many isolation and purification protocols involve flow cytometry and cell sorting. Positive and negative sorting for cell surface markers can quickly generate enriched populations.

The number of cells that can be isolated varies greatly depending upon the cell and tissue type. For example, cardiac stem cells are quite rare, while hematopoietic stem cells (HSCs) occur in high enough numbers that they are routinely isolated and used in bone marrow transplantation. HSCs for bone marrow transplantation are collected either directly from bone marrow or by apheresis, the removal of white blood cells from peripheral blood. Prior to apheresis, the donor is injected with granulocyte-colony stimulating factor to mobilize stem cells from the bone marrow.

Mesenchymal stem cells (MSCs) were originally isolated from bone marrow stroma but were subsequently found to be present in most tissues of the body including cord blood, adipose tissue, skin, and periodontal ligaments, which attach teeth to the jaw. Adipose tissue is becoming an important source of MSCs because adipocytes are easily accessible and present in relatively high numbers in the body. It has been estimated that 1 g of adipose tissue yields 5,000 MSCs, whereas bone marrow aspirate contains 100–1,000 MSCs per ml (Strem et al. 2005).

Sources of somatic stem cells in the human body.

Induced pluripotent stem cells (iPSCs) are somatic cells that have been reprogrammed to become pluripotent. Theoretically, any somatic cell could be reprogrammed. Practically, it has been found that some are relatively straightforward and others are more technically challenging.

Most iPSCs have been generated using retroviral and lentiviral vectors to introduce transcription factors into stem cells. However, there are concerns with using these viral vectors. Previous studies of retroviral infection of embryonic cells had suggested that retroviruses are silenced in these cells. Silencing is an epigenetic process that suppresses transcription. However, it was demonstrated that silencing was often incomplete and viral genes could still be expressed. A major consideration for using retroviruses to generate iPSCs is that the viruses integrate into the host DNA. Depending on the integration site, integration can have deleterious effects on the cells, altering gene expression and increasing the risk of tumor formation. Adenoviruses (Stadfield et al. 2008) and Sendai virus, an RNA virus (Seki et al. 2012), have been used as alternative vectors to transduce transcription factors because they do not integrate into the genomic DNA of the cell.

Viral-mediated introduction of transcription factors is very inefficient. A more efficient method was found to be the combination of lentiviruses and micro RNAs (miRNAs) to reprogram cells (Anokye-Danso et al. 2012). These small RNAs bind to mRNA and either inhibit translation or cause degradation of transcripts. miRNA clusters, including miR-290-295 and miR-302-367, have been shown to enhance reprogramming of somatic cells into iPSCs.

Several chemical compounds that modulate enzymes controlling epigenetic modifications have been evaluated for increasing the efficiency of transduction by transcription factors. DNA methyltransferase and histone deacetylase (HDAC) inhibitors were shown to potentiate the efficacy of transduction. The HDAC inhibitor valproic acid was the most effective, increasing reprogramming efficiency by 100-fold (Huangfu et al. 2008). As with the miRNA mimics, the use of valproic acid eliminates the need to transduce with the oncogene c-myc.

A number of other inhibitors of kinases, such as the glycogen synthase kinase-3 (GSK3) inhibitor CHIR99021 and the MEK inhibitor PD0325901, and other enzymes that are in pathways involved in pluripotency have also been shown to enhance the efficiency of reprogramming (Zhang et al. 2012).

Plasmid expression vectors have been used to introduce transcription factors (Okita et al. 2008), but the efficiency is low, and occasionally expression plasmids can integrate into genomic DNA.

Somatic cell nuclear transfer (SCNT) is the transfer of an isolated somatic nucleus into an enucleated egg. The egg is stimulated to divide, usually by an electric shock, though caffeine has recently been used (Tachibana et al. 2013). The somatic nuclei are reprogramed by the egg, and the resulting daughter cells become pluripotent stem cells.

In animals, SCNT is routinely used to study stem cells. Recently, SCNT was used to transfer nuclei from skin fibroblasts to enucleated human eggs to generate pluripotent stem cell lines (Tachibana et al. 2013). For animal cloning, after a number of cell divisions, the egg can be implanted into a surrogate, as was done with Dolly, the first cloned sheep (Wilmut et al. 1997).

The culture conditions and types of media used for stem cell culture depend on the type of stem cell. There are a wide range of protocols and products available for both maintaining stem cells in an undifferentiated state and for differentiating them into different lineages and cell types.

Originally, all ESC cultures were maintained on feeder cell layers. Inactivated mouse embryonic fibroblasts (MEFs) were used to provide factors and a substrate that allowed ESCs to grow and divide. There are several problems associated with MEFs, including the potential for the introduction of mouse-derived infectious agents, undesirable protein transfer, and lot-to-lot variation among feeder cells.

MEFs can either be purchased or freshly generated in the lab. Fibroblasts from ~14–15-day-old fetal mice are cultured and expanded for 3–4 days. To be used as a feeder layer, MEFs must be mitotically inactivated, either by irradiation with UV light or incubation with mitomycin C. Stocks of MEF cells can be frozen either before or after inactivation. 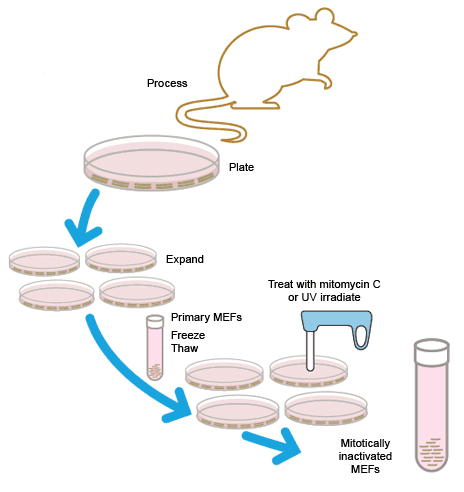 A consideration in the choice of culture system is that stem cells have been shown to acquire xenoantigens from culture products derived from other animal species. This was first shown in hESCs cultured with mouse feeder cells and animal-derived serum. These stem cells incorporated non-human sialic acid, against which many humans already have circulating antibodies (Martin et al. 2005). In addition to feeder cells, animal-derived products used for culture include serum and other matrices. The potential for stem cells to cause an immunogenic response can restrict their clinical use.

There are two types of feeder cell-free media: defined media and conditioned media. These media will support the growth of stem cells and contain factors that inhibit differentiation. The components of the media and the supplements vary depending on the type of stem cell and the animal.

Defined medium is a serum-free medium that has been supplemented with recombinant growth factors and other molecules that are required to support the growth and pluripotency of stem cells.

Media formulated for stem cell culture often contain factors such as leukemia inhibitory factor and bone morphogenetic protein to prevent differentiation. Rho-associated coiled-coil containing protein kinase (ROCK) inhibitors such as Y-27632 and thiazovivin have been demonstrated to increase the viability of newly isolated stem cells (Chen et al. 2010). For the culture of hESCs, basic fibroblast growth factor (bFGF or FGF2) is usually present in the media but not for most other stem cell media. Some defined media for human cell culture may contain bovine serum albumin (BSA) and is therefore not completely free of animal protein. Additionally, other culture matrices (described below) are often derived from animal cells.

Long-term culture in serum-free media has been shown to cause epigenetic changes in cultures as the cells adapt. For instance, it was shown that hESCs start to express CD30, a marker for certain types of malignancies, when grown in media with knockout serum replacement but not in media with fetal calf serum (Chung et al. 2010). Epigenetic changes with different culture conditions have been shown to include methylation, histone modification, and in female ESCs, X-chromosome inactivation (McKewn et al. 2013).

Stem cells not growing on a feeder layer need a matrix for attachment and growth. A culture matrix contains extracellular matrix (ECM) proteins and polysaccharides such as vitronectin and proteoglycans. There are many matrices available with varying combinations of proteins and carbohydrates. Different types and sources of stems cells require different matrices, and different matrix components can either maintain pluripotency or help drive differentiation. Cell matrix products containing only human ECM are available.

Frequent testing of stem cultures is necessary due the propensity of cultured stem cells to undergo genotypic and phenotypic changes or mosaicism. Initially, when newly isolated cells are at a sufficient density, they are usually screened for pluripotency, appropriate gene expression, and a normal karyotype (see Stem Cell Analysis for more details on stem cell testing). Thereafter, the stability of the stem cells is confirmed at regular intervals and after frozen stocks are thawed and plated. Additionally, particularly in lines that use feeder layers, cultures must be checked for contamination.

There are many formulations for media for directed differentiation of stem cells. Usually, there is a reduction in growth factors and an addition of other factors. Frequently, differentiation medium is combined with a change of the culture matrix to help promote the desired path of differentiation.