Drug discovery and development require considerable effort to identify and characterize lead molecules that have high binding affinity and specificity for their protein targets coupled with low cross-reactivity and toxicity. Thus, screening small molecules and biologics for activity and desirable adsorption, distribution, metabolism, and excretion (ADME) properties is an important step in the drug development process. In antibody screening, binding assays must be accurate and sufficiently high-throughput to identify and eliminate poor candidates earlier in the drug development process, before advancing to clinical trials. Once an active small molecule or biologic has advanced to production, downstream processing steps such as purification must be continually monitored for quality control and process optimization.

Here we describe how the SPR technology implemented in Bio-Rad's ProteOn™ XPR36 protein interaction array system can be used in antibody affinity and kinetic screening as well as quality control applications.

Surface plasmon resonance (SPR) technology provides data on the affinity, specificity, and kinetics of biomolecular interactions in real time without the need for labels making it an ideal tool for use throughout the drug development process. To effectively apply SPR technology to drug discovery and development, the SPR platform must be fast, cost effective, and amenable to high throughput.

Monoclonal antibodies are increasingly being used in medical research, basic science, and disease diagnosis and therapy. SPR plays an important role in antibody screening and characterization, providing a variety of useful data such as antibody affinity, epitope mapping, and binding specificity. SPR can also be used to assess antibody cross-reactivity in multiplex assays. Unlike traditional endpoint assays such as ELISA, SPR technology monitors binding in real time and can analyze both the association and dissociation phases of an interaction, allowing for the detection of weak binding events that would otherwise be difficult to characterize.

The ProteOn XPR36 system offers a distinct advantage over other SPR platforms by facilitating the One-shot Kinetics™, approach, the rapid kinetic screening of antibody targets with a single analyte (antigen) injection. The kinetic constants of a single antibody-antigen interaction can be obtained by the simultaneous injection of a full concentration series of analyte without having to regenerate the ligand surface, in contrast with traditional SPR instruments that allow only sequential injections (Bravman et al. 2006).

A novel method has been developed to further increase the throughput of kinetic screening on the ProteOn XPR36 protein interaction array system. Using a step-wise immobilization protocol, 36 different targets are immobilized on a single ProteOn chip to form an array for high-throughput screening. In this example, the ProteOn sensor chip is functionalized with 36 unique target proteins, allowing for the acquisition of information-rich kinetic screening data in a high-throughput fashion (Abdiche et al. 2011). This 36 x 1 array allows researchers to screen analytes simultaneously against 36 different targets of interest, enabling rapid comparison among large numbers of interactions.

Equilibrium data for Group I antibodies against their analyte.. An overlay of the equilibrium fits for all 36 spots is shown, highlighting the large amount of high-quality data that can be generated simultaneously.

Careful design and optimization of an SPR experiment is critical for the collection of high-quality antibody kinetic data. Using low-density ligand surfaces and high analyte flow rates reduces the influence of mass transport and eliminates crowding effects. Proper data referencing removes artifacts such as noise and baseline drift (Abdiche et al. 2011). The unique, real-time double referencing of the ProteOn system enables the acquisition of high-quality kinetic data by collecting an in-line reference blank for every interaction surface at the same time the interaction occurs (Hosse et al. 2009). This eliminates the need to perform a separate blank injection and is especially important when collecting data on slow-dissociating complexes over a long period of time, as in the case of antibody capture surfaces such as anti-Fc Ab or protein A/G (Bravman et al. 2009, Rich and Myszka 2010).

Qualitative binding assessments can be used to rank relative antibody affinity for different targets, map or bin epitopes, and define structure-activity relationships for small molecules. Yes/no binding results obtained from SPR analysis of biomolecular interactions can be used to correlate binding with a particular analyte/ligand property or to assess cross-reactivity with different biomolecules. Screening antibodies against antigens with site-directed mutations can help map epitopes and lead to improved antibody design (Bravman et al. 2009). Competitive binding assays such as the classic sandwich assay can be used to determine whether different antibodies recognize the same or different epitopes on an antigen, a process called epitope binning (Abdiche et al. 2011, Abdiche 2009). 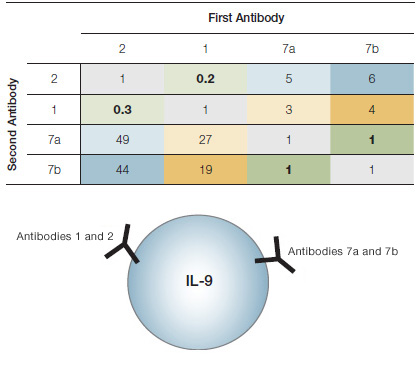 An important step in drug discovery is the screening of large libraries of small molecules for affinity and activity against a protein target. High-throughput small molecule assays with short development times are crucial for identifying active small molecules from large compound libraries. SPR technology can be extremely valuable in small molecule drug discovery because it provides activity and specificity data that allows for the quantitative ranking of lead compounds. Because small molecule libraries can range in size from thousands to millions of compounds, platforms that speed time to results are highly desirable at this stage. Conventional SPR devices do not have sufficient throughput to address this need and often are used as a conformational technology as a result. 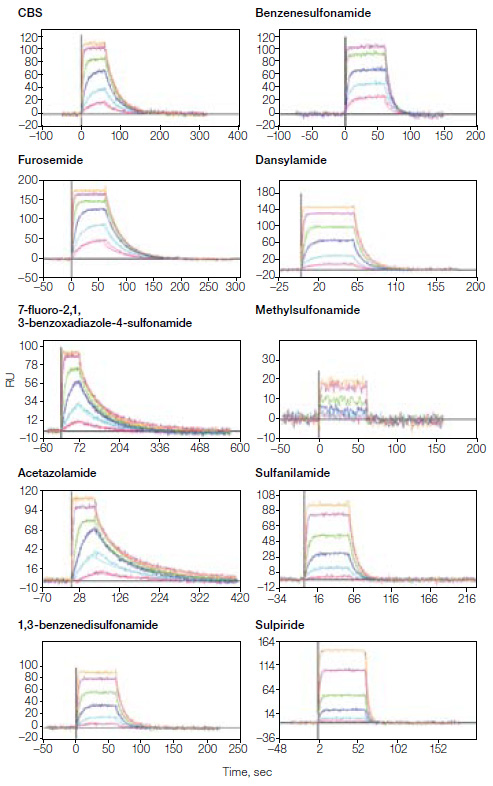 Sensorgram plots in kinetic studies of CAII (20,000 RU) and an inhibitor.

Abdiche YN et al. (2009). Exploring blocking assays using Octet, ProteOn, and Biacore biosensors. Anal Biochem 386, 172–180. PMID: 19111520
The authors demonstrate the use of label-free real-time optical biosensors in competitive binding assays by epitope binning a panel of antibodies. Three assay configurations (tandem, premix, and classical sandwich blocking) were each implemented on three platforms, ForteBio's Octet QK, Bio-Rad's ProteOn™ XPR36 system, and GE Healthcare's Biacore 3000. Blocking profiles were obtained for each antibody relative to the others in the panel to create bins of antibodies with similar epitopes. The advantages and disadvantages of each biosensor are discussed along with factors to consider in selecting an appropriate blocking assay configuration for a particular interaction system and tips for dealing with ambiguous data.

Bravman T et al. (2006), Exploring “one-shot kinetics” and small molecule analysis using the ProteOn XPR36 array biosensor. Anal Biochem 358, 281–288. PMID: 16962556
This article describes the use of the ProteOn™ XPR36 parallel array biosensor to characterize the binding kinetics of a set of small molecule–enzyme interactions. Using the ProteOns system’s crisscrossing flow path system, the authors collected response data for six different concentrations of each analyte over six different target protein surfaces. This "one-shot" approach to kinetic analysis significantly improves throughput while generating high-quality data even for low-molecular-mass analytes. The temperature dependence of the kinetics for four of the inhibitor-enzyme interactions was also determined in the range of 15–35ºC. These results illustrate the potential of this new parallel-processing biosensor to increase the speed of kinetic analysis in drug discovery and expand the applications of real-time protein interaction arrays.

Bravman T et al. (2009). Screening, ranking, and epitope mapping of anti-human IL-9 supernatant. Bio-Rad Bulletin 5540.
The ProteOn™ system was applied to the selection, ranking, and epitope mapping of 20 monoclonal Ab supernatants. Anti-mouse Ab was used to capture antibodies from supernatants, and the analyte IL-9 was injected across this surface to analyze the Ab-Ag interactions. The throughput of the system was exploited by capturing five different ligands in parallel and determining the binding kinetic constants in a single injection of five analyte concentrations. Four antibody samples were purified, and then epitope mapping was performed.

Bronner V et al. (2010). Rapid assay development and optimization for small molecule drug discovery. Bio-Rad Bulletin 5797.
This report describes how the ProteOn™ system was applied to rapidly establish a small molecule screening and characterization assay using the One-shot Kinetics™ approach. The model system consisted of a putative lead compound Y and a protein domain of its target protein PDX. The assay and analysis time were significantly reduced by the high-throughput 6 × 6 interaction array. Ligand-protected immobilization was employed to immobilize the ligand to the sensor chip surface prior to its analysis with the analyte. This approach ensured that the ligand was immobilized in its active orientation.

Miura T et al. (2010). High-throughput profiling of kinase inhibitor selectivity using the ProteOn™ XPR36 protein interaction array system. Bio-Rad Bulletin 5960.
The authors describe the use of the One-shot Kinetics™ approach with the ProteOn system to generate KD values during the screening of small molecule kinase inhibitors against five known important kinase targets. The biotinylated kinases and one ATPase were immobilized, and a concentration series of the inhibitors were injected. The assay was evaluated using Z'-factor analysis, and it was shown that an Rmax of 17 RU was sufficient to achieve consistent results.

Rich RL and Myszka DG (2011). Survey of the 2009 commercial optical biosensor literature.  Mol Recognit 24, 892–914. PMID: 22038797
The commercial biosensor literature as of 2009 was reviewed by 22 biosensor users who set the criteria for their expectations in a publication and ultimately decided to use a pass/fail system for selecting which papers to include in this year's reference list. Of the 1,514 publications in 2009 that reported using commercially available optical biosensor technology, only 20% passed their cutoff. They selected ten papers to highlight good experimental technique, data presentation, and unique applications of the technology.

Tabul M et al. (2010). Rapid, high-throughput screening of protein kinase inhibitors using the ProteOn™ XPR36 protein interaction array system. Bio-Rad Bulletin 5965.
This paper describes the rapid optimization of immobilization conditions for protein kinase targets to ensure that the immobilized protein remains in an active state. Compounds from two small molecule kinase inhibitor libraries were screened against each kinase target to identify binding hits. Detailed kinetic analysis of the positive binding compounds was conducted to determine the binding constants. Screening of 110 compounds took only 5 hr, and all the work was completed on a single GLH sensor chip.

Rich RL and Myszka DG (2000). Advances in surface plasmon resonance biosensor analysis. Curr Opin Biotechnol 11, 54–61. PMID: 10679342
This review article describes in detail how to design SPR experiments and analyze SPR data to produce high-quality kinetic data, with particular emphasis on strategies for reducing the influence of mass transfer and proper referencing and blanking of kinetic data. Sample data for low–signal-to-noise binding interactions show how proper referencing and blanking of data can allow for the detection of weak binding events or interactions with small molecules.

Yousef M (2007). Advances in rapid monoclonal antibody screening. Am Biotechnol Lab 25, 26–28.
This article describes an alternative method for the rapid screening of monoclonal antibodies using multiplexed SPR and the One-shot Kinetics™ approach of the ProteOn™ XPR36 protein interaction array system. The ProteOn system was used to screen supernatants to identify high-affinity mAb candidates against human IL-12 and hemoglobin E. Over 250 supernatants were screened in 12.5 hr in one experiment, using a single sensor chip. There was no need to purify antibodies from the supernatants prior to analysis.