Ion exchange chromatography is a technique for separating compounds based on their net charge. Ion exchange chromatography media contain negatively or positively charged functional groups covalently bound to a solid support, yielding either a cation or anion exchanger, respectively. Charged compounds are adsorbed and retained by an ion exchanger having the opposite charge, whereas compounds that are neutral or have the same charge as the media pass through the void volume and are eluted from the column. The binding of the charged compounds is reversible, and adsorbed compounds are commonly eluted with a salt or pH gradient. Ion exchange media are available in various particle sizes, ionic forms, and purity ranges.

This section provides an overview of the selection of ion exchange chromatography media based on factors such as the isoelectric point (pI) of the compounds to be separated and the ionic form, porosity, and particle size of the media. The quick guide for media selection below is based on the specific technique used for separation — such as ion-exchange, hydroxyapatite, fluoroapatite, or affinity chromatography — and the various media available from Bio-Rad for these techniques. To determine whether ion exchange chromatography is the most suitable approach for your application and to learn about other chromatographic methods that may be applicable to your purification needs, visit our Chromatography page.


What Molecules Can Be Purified by Ion Exchange Chromatography? 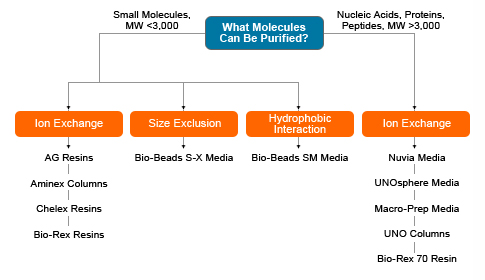 Selection of an ion exchange chromatography support depends on the properties of the compounds to
be separated. 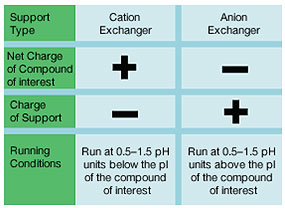 Media Porosity — the porosity of a support refers to the total pore volume within the matrix of the support; greater pore volume equals higher porosity. A very porous support may have either many small pores or a few large pores. The exclusion limit of a support is defined as the size of the largest compound that is able to enter the pores under a given set of conditions. Porous media with high exclusion limits are recommended for high-molecular weight compounds such as proteins, antibodies, and other biomolecules. Low- or high-porosity media with low exclusion limits are recommended for the separation of low-molecular weight compounds such as inorganic ions and organic acids. Some of the high-porosity media that Bio-Rad offers include the UNO family of ion exchange media, UNOsphere, Nuvia, Macro-Prep, and Bio-Rex 70 media. Low-porosity media include the AG and Chelex resins