Bacteria are widely used as hosts for the production of recombinant proteins that do not require posttranslational modifications such as glycosylation for bioactivity. In this section, we describe the purification of a Staphylococcus aureus α-hemolysin protein from E. coli. This protein is a 293-amino-acid toxin that is not easily purified. Here, we describe a single-step protocol used to purify and refold α-hemolysin that is produced as inclusion bodies in E. coli. Other methods of protein purification rely on multiple steps for the recovery of bioactive proteins from inclusion bodies, where the most important step is the refolding of the protein into a bioactive form. Protein expression in the form of inclusion bodies is often considered undesirable because the protein is insoluble. To solubilize proteins from inclusion bodies, the proteins must be dissolved and unfolded, thereby incurring the risk of destroying the activity of the protein. In this application, we describe how denaturation is minimized through controlled on-column refolding.

In contrast to the risk of denaturation during solubilization, protein expression as inclusion bodies presents several advantages:

After pelleting cells by centrifugation, the membrane proteins are solubilized, and the inclusion bodies are recovered by further centrifugation and solubilization. The final soluble fraction is clarified by a third centrifugation spin before loading onto a Bio-Scale™ Mini Profinity™ IMAC column, where refolding occurs during an integrated washing step. The protein of interest is then eluted and subsequently desalted by passage through a second column, a Bio-Scale™ Mini Bio-Gel® P-6 column (figure 1). 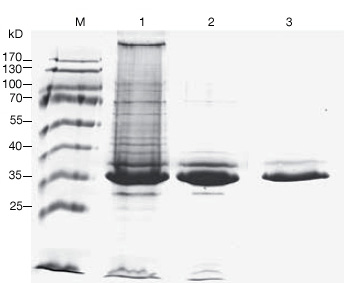 This method allows the user to rapidly obtain purified bioactive staphylococcal α-hemolysin toxin in a single step, saving significant time over other methods, which can require up to 60 hours. Because the protein contains a polyhistidine tag, it is amenable to on-column refolding and purification in a single step. The unfolded protein binds to the column due to the presence of denaturant in the binding buffer. Subsequent washing and elution steps use buffers that do not contain urea, the denaturant, which allows the protein to refold on the column. Refolding proteins on the column is efficient because it minimizes intermolecular interactions that can lead to protein aggregation. The proper folding of the protein is confirmed using a functional assay, wherein the
α-hemolysin is tested for hemolytic activity against erythrocytes (figure 2). Using this method, 3.5 mg of histidine-tagged α-hemolysin can be purified and refolded in less than one hour and the purified protein is free of precipitate, indicating that no aggregation occurs.

Fig. 2. Hemolytic activity of His-αHA. 1, hemolytic assay performed with the His-aHA prepared using a drop-wise dilution method. 2, hemolytic assay with refolded His-αHA purified with the Profinia protein purification system. The assays were performed by incubation of the toxin (20 µg/ml) with 1 ml of a 5% defibrinated rRBC suspension in PBS, pH 7.3, for 30 min at 37°C. The hemoglobin release was calculated from absorbance measurements at 540 nm. (Rhazi et al. 2009).