Digital PCR, along with other new techniques such as next-generation sequencing, is transforming microbial research and infectious disease management. The combination of speed, increased sensitivity, and absolute quantitation of microorganisms is advancing many fields, including pathogen identification and detection, public health, epidemiology, phylogeny, and characterization of the composition, and changes in microbiomes.

This page gives a brief overview of notable applications of digital PCR in microbiology, showcasing its broad potential for research and improving public health.

The ability to concurrently detect low concentrations of pathogens, detect variants, profile populations, and provide absolute quantitation is opening up new possibilities for human and animal testing and treatment in both research and clinical settings. Detection and quantification of pathogens and drug resistance are two applications that will benefit from the sensitivity of Droplet Digital™ PCR (ddPCR™) Technology.

Detection and Quantification of Pathogens

Viral load — the ability to detect rare events and obtain absolute quantitation in the absence of a standard curve increases the accuracy of results, virtually eliminates current problems with standardization, and facilitates effective treatment decisions. For example, digital PCR provides more sensitive testing of viral load in patients with HIV/AIDS being treated with combination antiretroviral therapy. Viremia in many of these patients is below the detection limits of commercial assays. 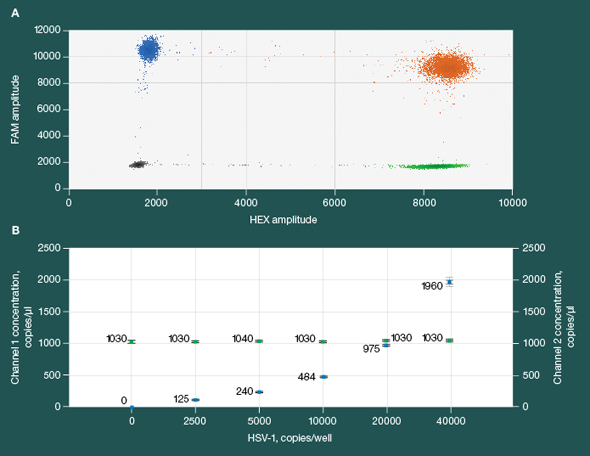 Pathogens in food — food-borne disease is a major health problem. Rapid and sensitive detection of pathogens in food is required to identify the species and strain, help track down the source of an outbreak, and for routine testing of foods for quality control. Increased sensitivity in detection and measurement of low levels of bacteria such as E. coli and Salmonella will improve surveillance and food safety.

The development of drug resistance is a growing problem for the treatment of many infectious diseases. Not only can digital PCR be effective in detecting, profiling, and quantifying drug resistant infections, it can be used to detect heteroresistance, the presence of a small subset of antibiotic-resistant organisms within a large population.

Heteroresistance is common in a number of infectious diseases that are worldwide public health problems. It is thought that heteroresistance can be a precursor to the emergence of antibiotic-resistant strains such as multidrug-resistant Staphylococcus aureus (MRSA) and multiple drug-resistant tuberculosis (MDR-TB).

Current testing methodologies to identify a subset of antibiotic-resistant organisms within a population generally involve culturing bacteria, which can take days. Due to its speed, digital PCR has been shown to be a good tool for identifying heteroresistance, which drug or multidrug resistance is present, and the numbers and proportion of bacteria that are resistant to each drug.

For TB, digital PCR data have been shown to be in agreement with the results from culturing and more accurate than real-time PCR or PCR followed by Sanger sequencing in detecting heteroresistance for isoniazid, rifampin, fluoroquinolone, and aminoglycoside (Pholwot et al. 2013).

Quantifying the Levels of HIV Reservoirs

Only a small proportion of the total number of microorganisms has been identified, and many remain uncultured or difficult to grow. The advent of PCR resulted in a rapid expansion of the knowledge and study of microorganisms, including those not amenable to culture. The introduction of digital PCR further expands our ability to discover, identify, and analyze microorganisms in small- and large-scale communities. 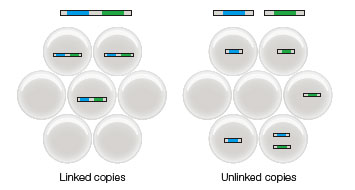 Yiping Cao and John Griffith use Bio-Rad's Droplet Digital PCR platform to determine variations in water quality from coastal watersheds to the ocean.

Droplet Digital PCR alone, and integrated with other technologies, will play an increasing role in many areas of microbial research and contribute to improvements in the detection and treatment of infectious diseases as well as provide new methods for basic microbiology studies.