Chromatography uses phase equilibrium partitioning principles to separate proteins, nucleic acids, or small molecules in complex mixtures based on their differing interactions with a stationary phase and a mobile phase. There are two main types of chromatography: liquid chromatography (LC) and gas chromatography (GC). Both LC and GC can be used for either preparative or analytical applications.

There are many different ways to use liquid chromatography to separate compounds of interest and the choice of technique usually depends on the physicochemical characteristics of the molecule of interest. The solid phases used for each type of chromatography, known as chromatography media or resins, are highly engineered porous inert supports functionalized with various chemical groups that determine the interactions with the molecules to be separated. Commonly used modes of separation are based on:

Here we give an overview of each of these chromatography methods. More detailed information can be found on their individual pages.


What Molecules Can Be Purified by Chromatography?

Bio-Rad offers a wide range of chromatography media for diverse research needs. Strong and weak anion and cation exchangers, different types of IMAC and protein A affinity media and size exclusion, hydrophobic interaction, and multimodal chromatography resins are available in bulk or in prepacked columns. Use the chart below to select the best media for your application. 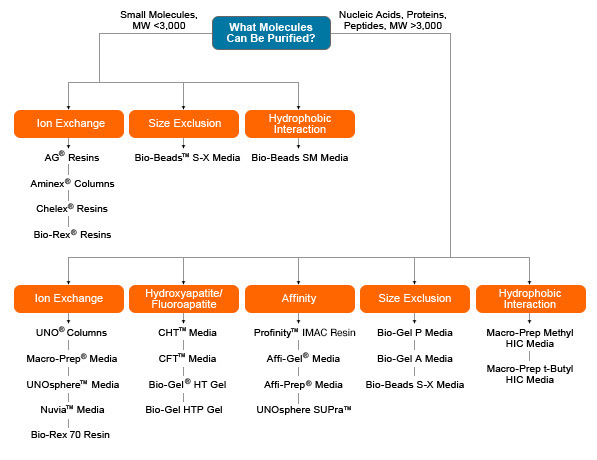 Proteins of interest can be genetically fused to affinity tags such as polyhistidine or glutathione S-transferase (GST), or modified posttranslationally with biotin or other nonpeptide tags. Chromatography resin can then be functionalized with molecules that specifically bind these tags, for example, reduced glutathione (GSH) to bind GST, or avidin/streptavidin to bind biotin.

When a complex protein mixture is passed over a functionalized resin, the protein of interest is immobilized on the resin but contaminating proteins are not bound. Likewise, antibodies can be captured by certain proteins immobilized on chromatography media. The molecule of interest can then be released from the resin using a buffer with a high salt concentration, a pH shift, or a competing ligand. Tagged proteins may be removed by enzymatic tag cleavage or other methods, and the protein can be repurified using an affinity column to capture the cleaved tags while allowing free protein to pass through.

Applications: affinity chromatography can be used as an initial capture step, an intermediate purification step, or a final polishing step.

Applications: IMAC can be used as an initial capture, intermediate purification, or final polishing step.

Nuvia IMAC Resin is a next-generation affinity chromatography media with ultra-high capacity over a wide range of pH and flow rates.

Ion exchange chromatography (IEX) exploits the electrostatic interaction between opposite charges to separate proteins based on their isoelectric points (pI).

Applications: IEX can be used as an initial capture step, an intermediate purification step, or a final polishing step.

Size exclusion chromatography (SEC), also called gel filtration chromatography, separates molecules based on their sizes. SEC resins are gels that contain beads with a known pore size. When a complex protein mixture is passed over SEC resin, small molecules move through the bead pores, whereas molecules too large to fit into the pores move around the beads and through the void space between beads. Since the traveled distance through the pores is greater than the distance around the beads, molecules elute from SEC resins in order of size — large molecules that are not trapped in bead pores travel a shorter distance and elute first and small molecules that are slowed by the bead pores elute last. Beads of different pore sizes can be purchased to achieve appropriate resolution.

Applications: SEC is not suitable as a first purification step but is often used as a final polishing step for buffer exchange and to remove protein fragments and aggregates.

Hydrophobic interaction chromatography (HIC) separates molecules based on their hydrophobicity. Hydrophobic amino acids (phenylalanine, tyrosine, and tryptophan) are generally buried within the three-dimensional structure of proteins, although some can be exposed on the protein surface. In an aqueous solvent, hydrophobic residues interact with each other via Van der Waals interaction, which is exploited for HIC. HIC resin is functionalized with aliphatic compounds that interact with and bind hydrophobic residues in proteins. This interaction can be modulated by differing salt concentration, pH, temperature, and organic solvent concentration. In particular, high ionic strength increases the interaction of hydrophobic residues with the HIC resin. For this reason HIC columns are generally loaded in high salt. Proteins are then eluted using a reverse salt (often ammonium sulfate) gradient or a gradient of organic solvent such as ethylene glycol.

Applications: HIC is suitable for initial capture, intermediate purification, and final polishing steps. HIC is an excellent choice following ammonium sulfate precipitation and ion exchange chromatography due to its compatibility with high-ionic-strength buffers.

Multimodal or mixed-mode chromatography (MMC) incorporates multiple modes of chromatography in a single resin. This enhances the selectivity of the resin because proteins can be separated based on several of their characteristics, rather than just a single one. MMC is of great value in cases where other resins cannot provide sufficient resolution.

Applications: MMC is an excellent choice for initial capture, intermediate, and polishing steps.

Learn more on the Multimodal or Mixed-Mode Chromatography page.

Protein purification can present significant challenges and may require a combination of chromatography techniques, for example, using several different chromatography resins in sequence. When designing a purification workflow it is important to keep downstream applications in mind. For applications such as crystallography, a high-purity, correctly-folded protein is essential. In other cases, functional purity is sufficient; if a protein of interest is assayed for an activity that can be accurately determined even in the presence of low-level contaminants, it may not be necessary to include additional purification steps to remove these contaminants.

A good rule of thumb is to get to the required level of purity in the least number of steps.

When possible, choose column combinations that do not require buffer exchange or concentration steps. IEX columns are eluted in high salt, whereas HIC columns are loaded at high salt — samples eluted from an IEX column are therefore already in the high ionic strength buffer required for HIC. A third SEC step can be added to the IEX → HIC combination as a polishing step to remove salt and aggregates.

Some affinity chromatography resins, conversely, are incompatible with high-ionic-strength buffers. Rather than choosing an IEX → buffer exchange → AC → HIC workflow, an IEX → HIC → AC combination would allow you to eliminate the buffer exchange step.

If ammonium sulfate precipitation is already part of your sample prep, an HIC column is an excellent first purification step. An IEX resin would be a poor first column choice, as your sample is not in the required low-ionic-strength buffer.