Ion exchange chromatography involves the separation of ionizable molecules based on their total charge. This technique enables the separation of similar types of molecules that would be difficult to separate by other techniques because the charge carried by the molecule of interest can be readily manipulated by changing buffer pH. 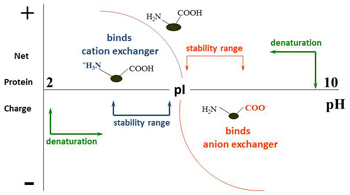 Ion exchange chromatography is commonly used to separate charged biological molecules such as proteins, peptides, amino acids, or nucleotides. The amino acids that make up proteins are zwitterionic compounds that contain both positively and negatively charged chemical groups. Depending on the pH of their environment, proteins may carry a net positive charge, a net negative charge, or no charge. The pH at which a molecule has no net charge is called its isoelectric point, or pI. 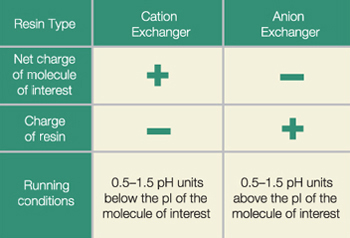 The pI value can be calculated based on the primary sequence of the molecule. The choice of buffer pH then determines the net charge of the protein of interest.

In a buffer with a pH greater than the pI of the protein of interest, the protein will carry a net negative charge; therefore, a positively charged anion exchange resin is chosen to capture this protein.

In a buffer with a pH lower than the pI of the protein of interest, the protein will carry a positive net charge; thus a negatively-charged cation exchange resin is chosen.

After loading an impure protein sample onto an ion exchange chromatography column, the column is washed to remove undesired proteins and other impurities, and then the protein(s) of interest is eluted using either a salt gradient or a change in pH. 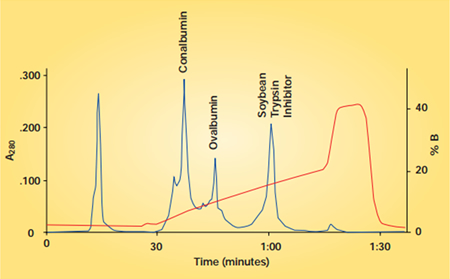 Although less common, a pH gradient can also be used for elution. Here, a pH gradient is chosen that approaches the protein of interest’s pI. Proteins will elute when the pH gradient reaches their pI, because they will no longer carry a net charge that allows them to interact with the column resin. 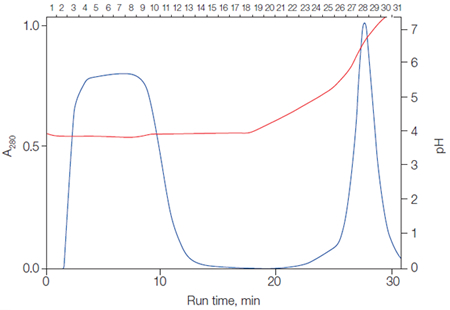 Since it is very difficult to generate reproducible and accurate linear pH gradients, a step-gradient is generally chosen when pH is used for elution.

Lastly, pH can be used to refine elution when using a salt gradient. Altering the pH of the elution buffer can affect the resolution of the method:

Fig. 5. pH can alter resolution of a method. Three overlaid chromatograms showing how changing pH from 6.5 to 8.5 shifts the elution profile when eluting using a salt gradient.

Note: Some proteins fall out of solution at a pH equal to their pI. For these proteins, elution with a pH gradient may not be possible.

For many protein purification workflows, protein folding and stability is a concern. In these scenarios, the selection of an anion or a cation exchanger depends on the protein of interest’s stability.

The number of charges on a strong ion exchanger remains constant regardless of the buffer pH. These types of resins retain their selectivity and capacity over a wide pH range. Examples of strong ion exchangers are quaternary ammonium (Q), sulfonate (S), and sulfopropyl (SP) resins.

Weak ion exchangers, in contrast, display pH-dependent function and so deliver optimal performance over only a small pH range. When the pH of the buffer no longer matches the acid dissociation constant (pKa) of the resin functional group, these resins suffer significant capacity loss. Weak anion exchangers function poorly above a pH of 9 and weak cation exchangers begin to lose their ionization below pH 6. When working with weak ion exchange resins such as diethylaminoethyl (DEAE) or carboxymethyl (CM) resins, it is important to work within the supplier-provided working pH range.

* Check manufacturer’s instructions for pH range for each individual resin. Proteins of interest may not be stable over the full pH range.

The ionic form of a support refers to the counterion that is adsorbed onto the resin’s functional groups. This ion can be changed by swapping the column equilibration buffer. Common counterions for anion and cation exchangers are Na+ and Cl-, respectively.

The strength of the interaction with a given resin varies for different counterions. The lower the selectivity of a counterion for the support, the more readily it can be exchanged for another ion of like charge (for example, the protein of interest). Similarly, elution buffer containing a counterion with a relatively lower selectivity for the support will displace proteins from the column resin less readily during elution. In some cases, this difference can be exploited, and counterions such as Li+, Br-, and SO42- are often used to improve resin selectivity.

Larger particles permit higher flow rates but yield lower resolution. A method that yields sharp, distinct peaks using a small-particle IEX resin will yield broader, less defined peaks when a larger-particle resin is used. Large-particle IEX resins are a great choice for large-scale and preparative work. Larger particle sizes are also the best choice when samples are viscous, such as when IEX is used as a first step in a protein purification workflow.

Flow rate refers to how fast buffer is being passed over a resin. The flow rate therefore determines the amount of time in which proteins can interact with the column resin, which is called the residence time of a particular column at a given flow rate. Unlike particle size, flow rate affects both resolution and capacity: longer residence times increase both the capacity and the resolution of a resin.

Flow rates are not only limited by the loss of resolution and capacity at higher flow rates but also by the resin itself. As flow rates increase, pressure on the resin increases. If the backpressure is too high, it can crush the column resin. Manufacturers thus provide a pressure limit for all of their resins.

Generally, the fastest flow rate that still renders the desired capacity and resolution is chosen. Although slower flow rates may provide even better resolution and capacity, this is often at the expense of protein activity, as many proteins lose activity with time under the conditions in the chromatography system.

The dynamic binding capacity of a resin refers to the amount of protein the resin can bind at a given flow rate; it is generally reported as mg/ml of protein bound at a certain flow rate. This value varies from resin to resin and can be important when fast flow rates are required to maintain protein activity.

Common buffers for anion and cation exchange chromatography are:

Ion exchange chromatography, unlike some other chromatography methods, also permits high flow rates, which in some cases can be crucial to the recovery of active protein. Finally, a limitation of weak ion exchangers is their pH dependence. When working outside of their optimal pH range, these resins rapidly lose capacity, and more importantly, resolution.

Bio-Rad carries a wide range of anion and cation exchange resins in prepacked column form or as bulk resin. Some resins are more suited for analytical chromatography, whereas others are better suited for preparative and/or process chromatography. To select the best media for your intended application, visit the pages below for more detailed descriptions of Bio-Rad anion and cation exchange media: