As the mobile phase continues to flow through the column, the column effluent, or eluate, is typically collected in fractions while monitoring the concentrations of the compounds eluted from the column over time to yield an elution curve, or chromatogram. The mode of detection varies with the analyte to be detected. For protein separations by column chromatography, protein concentration can be monitored manually using a dye-based protein assay such as the Bradford assay; however, such manual monitoring is labor intensive.

More commonly, a UV detector or spectrophotometer is attached to the chromatography system to continuously monitor protein elution from the column by measuring light absorption at 280 nm (A280) by the amino acid tryptophan. The resulting chromatogram is then analyzed to quantitate proteins in the eluate. Each distinct peak represents a unique component resolved by the column, and the area under the curve corresponds to the amount of that compound eluted from the column. It is important to note that a single peak may contain more than one protein species; therefore, further analysis of the eluted fractions may be required, for example, by gel electrophoresis.

A typical chromatogram displays an initial broad peak of eluted protein that interacts weakly with the resin or, in some cases, not at all. In most cases, the column is washed with binding buffer until this first flowthrough peak (labeled “Binding Conditions” in Figure 1) has completely eluted, and the A280 reading returns to baseline. 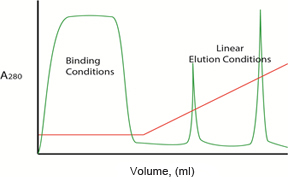 Proteins that interact strongly with the resin are then eluted by changing the composition of the elution buffer. The specific composition of the elution buffer depends on the physicochemical properties of the molecules to be separated and the chromatography media used, often referred to as different media chemistries. Ion exchange chromatography, for example, which relies on interactions based on the net charges of the molecules, uses elution buffers of increasing ionic strength.

The red line in Figure 1 shows a linear gradient elution, but proteins can also be eluted using stepwise isocratic elution, where buffer conditions are changed in a stepwise fashion. By altering the elution gradient, flow rate, column length, and resin particle size, the protein separation ability (or resolution) of a given resin can be changed. Chromatography methods are optimized to yield sharp, tall peaks that are well separated (Figure 2).

Fig. 2. Optimization of resolution by changing flow rate. Optimal peak separation is achieved at a flow rate of 229 cm/hr.

Regardless of the interactions that are being exploited, liquid column chromatography is carried out in six steps:

Most liquid chromatography protocols begin with a resin equilibration step. A buffer that is compatible with the protein of interest and the resin of choice is passed over the column. A common practice is to equilibrate the column with 5–10 column volumes (CVs) of equilibration buffer.

Sample can be loaded manually or using a sample pump. Some types of chromatography limit the volume of sample that can be loaded onto the column. Another important sample loading consideration is that most resins have a finite capacity to bind protein; overloading a column by applying too much sample can adversely affect separation.

Once proteins have been immobilized on the stationary phase, proteins that interact only weakly or nonspecifically with the resin are removed by washing the column with several column volumes of wash buffer. This wash buffer can have the same composition as the equilibration buffer or contain components that disrupt weak specific interactions.

After all nonspecifically and weakly interacting proteins have been washed off of the resin, proteins that interact strongly with the resin are eluted from the column by changing the composition of the buffer that is passed over the resin.

In ion exchange chromatography, proteins are eluted with high–ionic-strength buffers or with a change in pH to disrupt the electrostatic interactions that immobilized the protein of interest. Proteins bound to a hydrophobic interaction resin, conversely, are eluted by lowering the ionic strength of the buffer. In affinity chromatography, proteins are commonly eluted from the column by the introduction of a competing ligand or by cleaving the affinity tag and may also be eluted using high-salt buffers or altering pH. Other elution protocols may involve mixing solvents of varying polarity to tune the solubility of each component in the mobile phase. 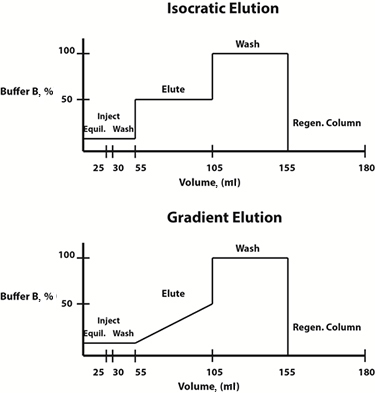 Note: Size exclusion chromatography does not require buffer changes since it does not depend on specific interactions between the mobile phase and the stationary phase. There are no true wash and elution steps, as SEC relies solely on the fact that large molecules are retarded by porous beads, whereas small molecules pass through the resin with minimal resin interaction.

After the protein of interest has been eluted from the resin, any proteins that remain bound to the resin are eluted by increasing the strength of the elution buffer. This step permits columns to be reused for future separations.

After stripping the remaining compounds bound to the media, the column is then either saturated with equilibration buffer for subsequent reuse or filled with a storage buffer.

Resolution refers to the separation of peaks in a chromatogram. The purpose of chromatography is to separate molecules of interest. Resolution is affected by the selective properties of the resin, by equilibration, wash, and elution buffer composition, flow rate, and by the sample volume. Compounds that elute as distinct peaks with a particular column and elution protocol may co-elute as a single peak with another chromatographic technique.

If the goal of chromatographic separation is purification of a protein of interest for downstream applications (that is, preparative chromatography), then yield, defined as the amount of the desired protein fraction recovered, is an important consideration.

Sample integrity is another key consideration for preparative chromatography. Applications such as crystallography require full-length, correctly folded protein. If activity of the protein is to be assessed in vitro, the purified protein must retain its enzymatic activity. Buffer choice, the addition of appropriate protease inhibitors, and speed are common, but not always sufficient, measures to maintain sample integrity.

Lastly, sample purity is an important consideration. In the case of co-eluting compounds, the detection of a single peak in a chromatogram does not ensure pure sample. It is therefore necessary to assess sample purity by gel electrophoresis (SDS-PAGE) or other analytic techniques.

When developing a purification workflow it is wise to consider the sample purity that is required for the intended downstream applications because sample purity, integrity, and yield often display an inverse relationship. For example, a five-column workflow may yield exquisitely pure protein, but because of the length of time required to separate the protein of interest from contaminating proteins and proteases, the protein may be completely inactive. In addition, since some of the protein of interest is lost at each column fractionation step, the total amount of protein recovered after five columns may be insufficient for the desired downstream applications.

Absolute sample purity is essential in certain applications such as antibody production for diagnostic or therapeutic applications. Some enzymatic studies, however, may require only functional purity; proteins that do not interfere with or enhance the protein of interest’s activity may be tolerated as contaminants to maximize sample integrity and yield.

This video presentation is an introduction the principles of size exclusion chromatography including sample preparation, method development, and factors affecting resolution.