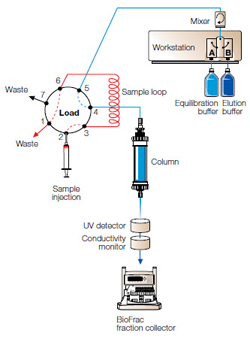 Fig. 1. A basic chromatography system using a pump and detectors.

Column chromatography is performed on a packed, three-dimensional stationary phase inside a glass, plastic, or metal column and can be used for both preparative and analytical purposes. Column chromatography techniques encompass a broad range of applications based on diverse solid and liquid phase chemistries and column configurations, enabling precise analyses as well as resolution of complex mixtures that would be difficult or impossible to separate by other means.

Column chromatography is therefore classified according to the type of fluid flow system used: 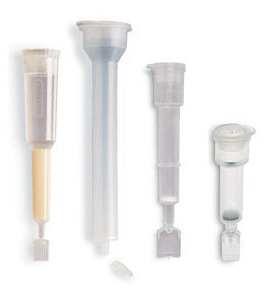 As its name implies, gravity chromatography uses gravity to pass sample and buffers across the column resin. Although prepacked gravity columns are commercially available, it is not uncommon for users to pack their own columns. Small-volume columns (~1.5 ml) designed for quick flowthrough by spinning in a microcentrifuge provide a convenient method for rapidly purifying many small samples. Elution from the column is often followed by quantification of  protein or nucleic acid concentration in collected fractions using colorimetric methods such as Bradford or Lowry assays (perhaps followed by SDS-PAGE) or by fluorometry or spectrophotometry, typically in the UV-visible range. Gravity chromatography is a low-cost, simple method of preparative chromatography, however it does not afford high resolution. 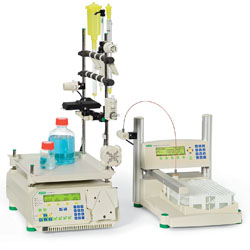 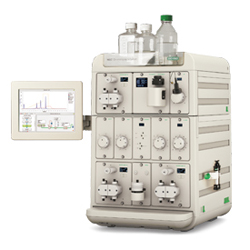 Applications: preparative and analytical chromatography of a wide variety of molecules, ranging from nonvolatile organics to nucleic acids, peptides, and proteins. 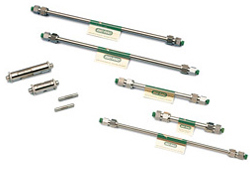 High-pressure liquid chromatography (HPLC), alternatively known as high-performance liquid chromatography, is conducted at very high pressures — up to 5,000 psi (34 MPa). HPLC is a powerful analytical tool providing high resolution and sensitivity, with the ability to detect concentrations down to parts per trillion while having very small sample requirements (in the microliter range).

Because HPLC systems can be operated at higher pressure, the resin particle size can be decreased, thereby increasing the resin’s resolution.

Since a much wider variety of compounds are analyzed using HPLC, HPLC systems usually have several types of detectors. A common combination is a UV-absorbance detector in combination with an evaporative light scattering detector (ELSD) and/or a mass spectrometer (MS). The combination of HPLC and mass spectrometry, a technique for determining the mass-to-charge ratios of molecular ions created by fragmenting the analytes after elution using electrospray, electron-impact, or other ionization methods, yields HPLC-MS, often abbreviated LC-MS,  a very powerful analytic tool used for applications such as environmental sampling, drug discovery, and proteomic studies.

Applications: preparative and analytical chromatography of a wide variety of molecules, ranging from nonvolatile organics to nucleic acids, peptides, and proteins.

Bio-Rad does not manufacture HPLC systems, but we do carry a full selection of HPLC columns.