Proteins in a sample can be quantified using different assays. This section describes available assays for protein concentration determination including the classic Bradford and Lowry assays.

Determine the concentration of protein in a sample by protein assay to:

The most commonly used protein assays are colorimetric assays in which the presence of a protein stain causes a color change, proportional to the amount of protein in the sample, that can be measured with a spectrophotometer. All protein assays utilize a dilution series of a known protein (usually bovine serum albumin (BSA) or bovine γ-globulin), to create a standard curve from which the concentration of the sample is derived (see Protocol tab). For additional information on protein quantitation assays see Sapan et al. 1999 and Noble and Bailey 2009.

The chemical components of the sample buffer and the amount of protein available for assay dictate the type of assay that may be used (see table and Selection Guide below).

*The Bradford assay is, however, highly sensitive to ionic detergents like SDS (see table below).

To measure protein concentration in Laemmli buffers, use the RC DC protein assay, which is compatible with reducing agents and detergents. For more information on protein quantitation using colorimetric assays, refer to Bio-Rad bulletin 1069.

Bio-Rad offers a number of protein assays based on the classic Bradford and Lowry assays. The choice of the assay will depend on a number of factors including the concentration of the proteins in the sample and the presence of reducing agents and detergents.

All assays are easy to use, require little reagent preparation, and give accurate and reproducible results.

In a typical protein assay, a chemical reagent is added to a protein sample, producing a visible result, such as a color change in the sample solution. This color change is quantitated with a spectrophotometer or microplate reader, and compared to a standard curve of known concentrations of protein versus their absorbance after reaction with the reagent. The amount of protein in the unknown sample is determined by interpolation, reading the concentration of protein on the standard curve that corresponds to its absorbance. 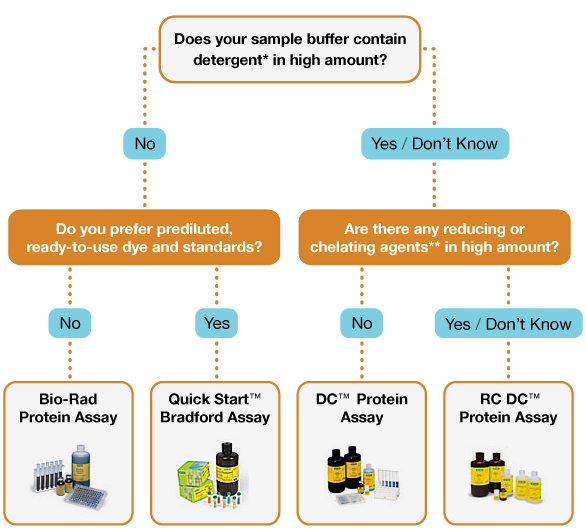 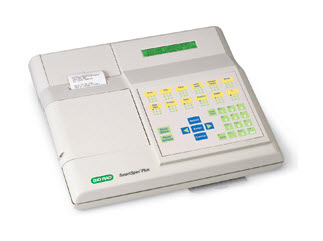